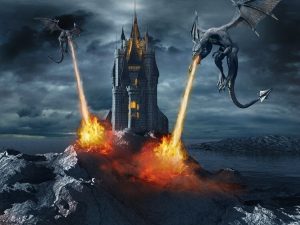 This is not a mad-rant like some others (ahem, Hilton), but it is a topic that gets me at least a bit feisty.

Today’s issue is one that I hear quite often — frequently enough that I want to write a post on the subject so I can send a link to people who ask about it in the future.

But before we get into specifics, let’s go over the basics of personal finance.

How Does Someone Become Wealthy?

There are actually many paths to wealthy. Life is complex and becoming wealthy is no different.

This is how I came up with E-S-I. It’s what I had done myself and seemed like a good summary of the many personal finance books I’ve read over the years.

If you want to know more about the history of the site, this philosophy is detailed more in my about page.

Yes, you could nitpick a bit here and there, but I think we all agree that earning, saving, and investing are at least near the top of the list when it comes to building wealth.

As the blog went on, I later wrote a post on how these three interact — how you can be good in some and “ok” in others and still become wealthy.

Then over time we added Millionaire Interviews. In this series each person has a different story. And yet they all ended up wealthy because somehow they applied E-S-I to different degrees in becoming successful.

The conclusion: earning, saving, and investing are all vital to becoming wealthy in one measure or another.

And yet, there are those who want stories of how to build wealth with one of the three keys missing.

I won’t say more about it at this time — let me just give you a sample of what I hear quite often.

Here’s an email I received a couple months ago:

Hey. Love your blog. Especially the millionaire blogs. I would make a suggestion: I would like to see people that make $75 to $120K a year profiled. The high incomes of some of your folks are no brainers to get to $1M net worth….I would like to see more savvy folks with lower incomes featured… That’s interesting to me and a bigger audience….

If some guy/family makes $250k plus a year, that’s a no brainier….Hell I could do that with no investment risk and free cash flow unless I was an idiot. I feel like the strategies of the lower incomes are actually more savoy and represent a better path for most people to model or entertain.

I’m 48, at a lower income most featured and at almost at $1M……I make my decisions work. And pay attention. If I made $350K the last three years, I’d be done and financially independent. Walking around in sandals and saying “no” a whole lot.

The expenses of trivial stuff of those folks is ridiculous if they are half ass interested in building net worth. Those who have income levels that are better than most, but still act like suburban robots because of the yearly income are not interesting….No brainer. Hell I do better than that.

These requests come at a regular pace. At least this guy will allow people to earn up to $120k! Most want to hear from millionaires who have a “low” income. Since average income in the US is somewhere around $60k, then “low” is likely $45k or below. That’s going to be a bit tough.

Before I get into more specifics, here was my response to the email above:

I don’t really search out the interviews for specific criteria. I let people volunteer and they tell their stories. That’s it.

There are a handful with “lower” incomes — though those incomes are higher than the averages in the US (which $75k to $120k is). You’ll have to dig through them all to find those.

Instead of looking at the high income people and complaining that they had an easy path to wealth, how about learning from them and what they did to grow their incomes? As you’ll see, I ask them where they started (income level) when they began working. Almost all of them started at very low incomes and worked their way up. Lots to learn here.

One other learning: they rarely do it on their own. Yes, there are some families where one person earns $300k, but it’s usually something like this:

It’s very interesting if you dig into the data, which I will be doing (and writing about it) once I get 100 interviews complete.

Becoming a Millionaire with a Low Income

Here are a few considerations for those with similar thoughts to the emailer above:

1. Millionaires volunteer for interviews, I don’t solicit them.

On every Millionaire Interview I always include a note that I’d like volunteers. Whoever volunteers, gets in.

I do not have the time, desire, or contacts to chase down millionaires with specific attributes. If anyone wants to find some and send them my way, I’m happy to let them tell their story. But the ones I “find” are simply volunteers.

In addition to the request for millionaires who became wealthy with lower incomes, I also get requests now and then for more interviews with women millionaires. Two comments on this one:

2. You can become wealthy with a “lower” income.

Yes, it’s possible to become wealthy with a lower income. I’ve even written about it and some millionaires I’ve interviewed have lower incomes (I used $100k and below in selecting these).

Here are some examples:

That said, while it’s possible to become wealthy on a lower income, it’s not optimal…

3. It’s easier to become wealthy with a higher income.

4. You can’t throw out one leg of a three-legged stool.

If you do, the stool collapses.

As I noted in Working the ESI Scale to Financial Independence:

Even if you’re “bad” in one of the steps you’ll likely be hindered significantly. There’s a reason Warren Buffett says “never lose money.” And if you’re bad at any of the three steps you’re going to lose money. Maybe you can overcome it with stellar results with the other two, but I doubt it.

And earning a low amount is “bad” in the “E” category. It can be overcome, but that’s way more the exception than the rule.

5. Concentrate on earning more yourself.

For whatever reason, people hate career advice. I don’t know 100% why this is, but they are doing themselves a great disservice by ignoring it since even a small bit of progress can have a massive financial impact.

Besides, I dislike whiners. Stop making excuses, get out there, and earn more! If it’s not with your career, look at creating a side business.

If you don’t want to earn more, make sure your spouse is working on it! 🙂

7. It’s not a no-brainer for a high income individual to become wealthy.

Here’s an email I received just a couple weeks ago:

It seems most of your interviewees are executives or at least earn a higher than average salary. Anyone can gain wealth when they are making $200,000 + a year. How about interviewing someone who has an average income that has attained financial independence?

The fact is that high income is not highly correlated with wealth generation. (Given this, you’d expect more lower-income interviewees to pop up, but they don’t.)

Read The Millionaire Next Door

if you don’t believe me. The people with the highest incomes are not the wealthiest (on average).

Yes, people with higher incomes have more POTENTIAL to accumulate wealth. But they do not realize this potential on average.

Why? Because they stink at one or both of the other keys — and it’s usually saving.

So while you think it’s a no-brainer to accumulate wealth with a large income, odds are that would not be true. And even if it is in your case, it’s not for most high earners.

The point of all of this is that if you ignore growing your income, it will likely severely hamper your wealth-building success. So don’t ignore it.

And don’t ask me to feature people who do! 😉