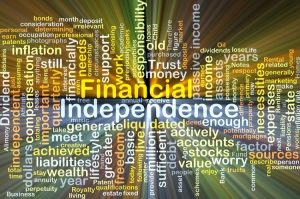 One of the things (maybe the only thing) I dislike about Mr. Money Mustache and the swarm of like-minded individuals he spawned with his philosophy is that he didn’t come around 20 years earlier.

If he had, I would have been retired much earlier.

But in my generation, retiring early was at 60. Now it’s somewhere around 40.

If I had known that there was a different way (either through MMM or my own realization), I would be retired earlier.

But how much earlier? I’ve always wondered that and have been meaning to dig into some numbers to find out.

So I went back and looked at over 23 years of Quicken data to estimate my financial independence (FI) date.

But before we get to that, we have some assumptions to make.

What Would We Spend?

As I wrote in Three Steps to Determine if You Have Enough to Retire, the first step in knowing when you can retire (or are at FI) is determining your post-retirement annual spending.

But what’s the right number to use in my situation?

There are many factors influencing to consider including:

Taking these into account, I established three post-retirement spending levels (these are all without any mortgage costs, though we still did have insurance, maintenance, taxes, etc. on the house, of course):

These three give us a nice low-medium-high set of spending options to consider.

Now on to the next question…

How Much Would We Earn?

We know the spending side of the equation so it’s time to consider how much we would earn in retirement.

For now we’ll leave out my rental properties. We’re simply talking about side hustle/business interests in the income estimates below.

With that said here are three income options to consider:

Now that we have both spending and income options, it’s time to crank some numbers.

Assets We Need at Various Levels

The spending/income levels above give us the following combinations to consider:

Putting these in order from lowest net need per year to highest, we get this:

Assuming we use the 4% rule for asset withdrawal, here’s what each of the net needs levels would require in assets:

Now by checking Quicken we can see when I reached each of these asset levels (excluding our home, of course).

This would give us FI numbers as follows:

Now of course there are a lot of variables we could use to adjust these, but I’m not doing a financial audit here, just getting us in the ballpark is fine IMO.

Up to this point we haven’t talked about the impact of my real estate purchases.

There are two main reasons for this:

So really the real estate purchases were just icing on the cake. They allow us to live at the higher end of retirement spending while not dipping one bit into assets.

So what do I make of all this? Here are some thoughts:

In the end, these numbers don’t mean that much. But they are fun to look back on. A bit of math gymnastics now and then is good for the soul. 😉