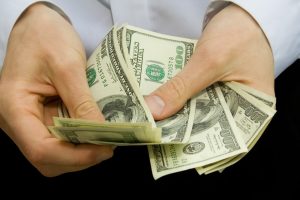 The other day I was listening to a podcast where the person being interviewed was talking about living on 25% of her family’s income. The implication was they saved 75% of what they made.

But I don’t think that’s the entire story.

She said her percentages were based on “take home pay”. Immediately I started doing the numbers in my head — what did that really mean? I assume that means taxes were already deducted. Was a 401k contribution also taken out? What about other expenses like medical insurance?

Then I moved on to other expenses. Did they have a mortgage? If not, living on 25% would be a lot more do-able. If they did, I don’t see how the numbers could work.

All of this got me wondering about our situation — how much did we actually live on while I was working?

I thought I had all the numbers because I pulled them when I wrote about our savings rate, so I resolved to look them over when I got home.

Before we get into the details, let me begin by talking about net versus gross pay.

My philosophy has always been that I make a certain amount of money (the gross) and EVERYTHING comes out of that. By looking at net (or take home pay), things can get muddy (as noted above).

For this reason, I prefer to deal with gross pay.

From there I feel it’s ok to deduct certain things like taxes if you want, but I prefer to spell those out and starting from gross pay IMO is the only way to be really clear about it.

I realize others might have different viewpoints, but I wanted to make this distinction as the details below will deal with gross pay.

When looking back on our data (I’ve been using Quicken for 20+ years so we have lots of it), there were really three big “expenses” for us. I put that in quotes because many people would not consider two of them to be expenses.

Anyway, here’s how our finances broke down by percentage:

This means that the actual amount we spent on ourselves during the 20 years I pulled the data was 17.0%. Yes, we lived on less than 20% of my earnings for over two decades.

Thoughts About the Numbers

So, what does this mean?

Not much really, other than to reinforce what I’ve been saying through the life of this blog: earning, saving, and investing are the three steps to financial independence.

It was an interesting exercise and helps me record this information for posterity.

It also shows ESI Money readers that I actually practiced what I preach.

And it gives me something to link to when people say they can’t afford to save. 😉