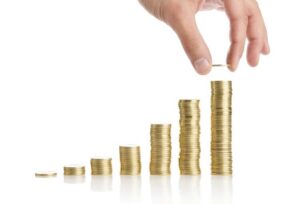 Now we round out the five by covering secrets 4 and 5.

We’re going to spend a lot of time on the first one because I love it.

We’re not going to spend much time on the second because while I like the concept, the book isn’t that great in this area IMO.

Secret 4 is one of my favorites. It goes as follows:

Develop an income stream from three or four sources, not just one.

And who wouldn’t be? Ha!

Here’s what the book had to say to introduce this subject:

The more “rivers” or “streams” of income you have, the happier you’ll be. You need to start thinking about this now. Make “multiple streams of income” a mantra and repeat it often. As usual, the proof is in the data:

When it comes to generating income, you want to create as many tributaries as possible to come together in one new, predictable larger stream.

The more (and different) income sources you can rely on in retirement, the more income stream diversification you will have. The leads to a higher sense of safety, security, and the cushion that is so important to our sense of well-being and happiness.

The data seems pretty clear — the more sources of income, the better.

Remember: every income steam matters no matter how small. The key to money secret #4 is adding as many as you possibly can.

Next he lists some potential sources of income as follows:

I would add a couple to this:

Couple this information with what’s above and it seems like almost everyone could have at least two sources of income in retirement: Social Security and part-time work/side hustle. No wonder the unhappy people are sad at only 1.85 sources. It’s likely they are living on a very limited total income.

I recommend transitioning some of your assets from growth to income several years (up to ten) before you get to retirement. That’s what we did and it’s worked out nicely.

Our sources of retirement income are as follows:

That gives us seven streams of income. The first three do the lion’s share of the work, but in the future we have a couple more that could be significant:

Next the author shares what the top sources of retirement income are:

What were the most common sources streaming toward the reservoir? Social Security was the number one answer.

The extremely happy group mostly listened pensions first as their primary source then dividend income after that. They also listed part-time work mixed with social security.

Some other source combinations that came up were corporate pensions, teacher retirement pensions, social security, rental, and portfolio income. These people know how to diversify—and I love it! These are the income streams many of the happiest people were reviewing. I want you to focus on the importance of diversifying the money you live on.

I bet you are pretty happy in retirement if you have a pension. I would be too. Pensions are few and far between these days — and quite nice to have.

It’s interesting that Social Security is number one. It shows that most people are still relying on a backup system as a major part of their retirement income. I bet the unhappy ones have it as the majority (or entirety) of their income.

Here the author also gets into the fact that diversity of income is just as important (maybe more so) than amount of income. No, he doesn’t say that outright but it seems implied to me.

Not sure what I think of that. Would I rather have one income source of $100k or three income sources that add up to $50k? I know. Depends on how solid the $100k was.

Next we move on to the amount of income that makes people happy in retirement:

The mean, or average, income for the happy group falls right around $82,770 per year, whereas the average income for the unhappy lands at $55,370. What does this reveal? A lot! More income equals more happiness—but only to a point. The place where the amount of income needed starts to level off shows yet another example of the “plateau effect.”

Now, for current retirees, what’s the magic number to reach in retirement income? I’m looking for an inflection point: the exact point where people begin to jump from “not” and “slightly” happy to “moderately,” “very,” and “extremely” happy. When I tabulate the data from these graphs, I get $72,277. Assuming a 20 percent tax rate, let’s multiply $72,277 by 0.8, which gives us $57,281 per year.

Divide that by 12 month, which gives us $4,818 per month. In other words, to reach a sense of moderate happiness, the average retiree needs to have close to $5,000 of spending money per month.

This is interesting to know, especially since I’ve written on how to have a $50k retirement. Apparently that could be renamed as “How to Have a Happy Retirement at $50k.” Ha!

But I’m not sure what these numbers mean for the rest of us. Do they mean we’re all happy if we get to $72k gross income? I don’t think so.

If you have $72k but need $100k are you going to be happy? Conversely, if you need $40k and have $55k will you be happy? More depends on the relationship between what you have and what you need IMO.

That’s why my guess is that those who have enough to cover their needs and a bit more are happy and those who fall short or barely squeak by are unhappy.

The book shares secret 5 as follows:

And it says the following on the topic:

Income investing is the method I’ve used and developed over the course of many years, and the one I find brings a lot of comfort and certainty to an otherwise uncertain practice.

Income Investing is a way to generate consistent cash flow from your liquid investments. It comes from three places:

I agree with the concept of income investing, especially as you near retirement. As such, we have structured many of our assets to produce income.

That said, the chapter that focuses on this subject could have been done much better IMO.

It could have covered the myriad of ways to invest for income along with a plan of how to approach each.

Instead it got into the technical details of the author’s “Bucket System” of investing, an approach I found both uninteresting and too complicated. I’m sure this sort of stuff plays well in a financial planning office when you’re showing a client all the work you’re doing for him and explaining the strategic importance of every move, but for someone like me who wants to do it myself, the system isn’t worth all the time and effort for a measly 4% return.

For instance, the author could have spent more time on real estate, pure dividend investing (part of his plan included this but it was muddled with many other investments), or even come up with some new way to earn 4% that didn’t require a master’s degree to understand and an engineer’s precision to execute.

I was disappointed in this section. It was the only chapter I didn’t like. I still highly recommend the book and think most pre-retirees will learn valuable lessons from it, but the chapter on secret 5 just wasn’t that good.

Anyway, that wraps up the five secrets of happy retirees. See anything that really stood out to you?