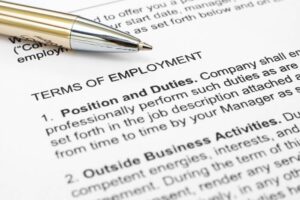 I’ve talked several times about how your career is your most important financial asset.

Given this, you want to treat your career like other major assets. You want to grow it, of course. But just as important is protecting it. That’s why I wrote Career Insurance: Protecting Your Most Valuable Asset.

One of the best ways to protect your career, but also one of the hardest and least known, was covered in a post I first wrote for Financial Samurai several years ago. It focused on employment contracts.

Most people are familiar with contracts for professional athletes — where the athletes agree to play for a given team for a given time at a given wage. Few people realize that there are similar contracts for top business executives. There are a few differences as I’ll detail below, but essentially do the same thing — they lock in a key employee in exchange for a guaranteed payday.

Now let’s get to the post I wrote, which I have updated a bit for the ESI Money audience…

As most Financial Samurai readers know, Sam is the expert on engineering your layoff.

His methods have helped hundreds negotiate great packages as they leave their employers. Obviously this is a tried and true method for maximizing your exit from a company.

But it’s not the only way. Today I’ll be telling you how you can negotiate your severance before you even take a job.

This post will detail the ins and outs of employment contracts (sometimes referred to as employee agreements). I prefer the former since that’s what every executive I’ve ever worked with called them.

Employment contracts are negotiated between an employer and employee prior to the employee joining the company. The contracts grant rights and privileges to each party as well as imposes requirements on both.

I am not a lawyer but I play one on the internet. Seriously, this is not meant as legal advice but rather a guideline to help you learn about employment contracts and potentially make use of them. I’m hoping some lawyers with personnel contract experience join us in the comments to fill in any blanks I miss.

Key Parts of an Employment Contract

Here are some common provisions an employer may agree to:

In addition to the above, there are often sections pertaining to the overall agreement such as:

Can I Have that in English?

The previous section may read to you like a foreign language. Believe me, the bullet points are actually pretty readable when compared to reviewing the actual contract.

To boil things down to the vital elements, here’s the essence of an employment contract:

If it’s not obvious, the pros and cons for the employee boil down to these:

In other words, it’s a pretty sweet deal for the employee. You can see why most executives want an employment contract.

How It Works in Practicality

Generally at some time in the recruiting process, the subject of an employment contract is brought up, usually by the employee. Employers are loathe to sign such an agreement as it requires them to pay an employee if there’s a falling out.

Employees want a contract, of course, because it guarantees them a payout if the relationship goes south.

So the topic is brought up and the negotiation is started. Is there an agreement? What are the key provisions? Who does what? And so forth. Until there’s some sort of resolution.

How to Get an Employment Contract

Here’s the bad news: employment contracts are difficult to get, especially in a slack labor market.

As I noted above, employers don’t like to give them because they basically take on financial liabilities (which no company likes to do) without a lot of compensation in return.

So why do employers give them and who gets them?

Employers give contracts to key employees in order for them to 1) accept a job initially and 2) remain in a job (with a sense of security) as long as useful.

In short, the employee has to be valuable enough that the benefit of having the employee is greater than the liability of the agreement.

As such, they are generally given at the executive level to managers who have the ability to deliver substantial business results. That said, any level of employee, as long as they are important to the company, can get one. The key is: you have some skill or ability that brings great value to the company.

Many of these principles can be illustrated through my personal experience.

In 1999 I joined a new company as a vice president.

It was standard for them to have employment contracts with all executives.

The standard agreement at the company basically entitled me to one year’s salary if I was let go for almost any reason. The exceptions were so unlikely to happen (get convicted of a felony, act immorally in a way that hurt the company, etc.) that there was virtually zero chance of me not getting a payout if fired. I was thrilled.

Five years down the road I was ready for a change and preparing to be hired by a new company as an executive vice president. This organization was much smaller, but about as profitable as my current company. The new, small company had no one with an employment contract — they didn’t even know what one was (or said they didn’t).

I provided them with a copy of my current agreement and told them I needed one before I would come aboard. They consulted their lawyer and basically copied the one I had at the old firm. The only change was they reduced the one year payout to six months. This was agreeable to me given my new compensation was much better and I joined the firm.

I worked for that company for nine years when another company wanted to hire me as their president, a significant move for me. Again when I brought up the subject of the employment contract the Owner/CEO claimed he’d never heard of one. I provided my copy and they eventually copied it. I joined the firm.

The first full year I was with them, we had a record sales year. The fourth month into year two the CEO left to run another business, they brought in a new CEO who didn’t want a president, and they fired me. Or in kinder terms they “exercised my contract”. I was paid to go away. You can read all the sordid details in The Day My Most Valuable Asset Took a Hit.

At that point I contemplated early retirement, but Sam had not yet convinced me of its benefits. I interviewed with a new firm and was hired within three months of being fired. They too claimed they had never heard of an employment contract. I gave them a copy of my most recent one and we began to negotiate back and forth. Two significant provisions changed:

I was fine with option #1 but pushed back on #2. The purpose of an employment contract is to pay the employee a set amount if he is let go for ANY reason other than criminal activity or significantly hurting the company. They wanted to add a performance element, something that is usually not in an employment contract because it is highly subjective and can be manipulated by the employer. I had been around the block a few times and knew that employers can trump up almost anything to be a performance issue if they want, so I didn’t want the provision.

But they held fast and gave me a take-it-or-leave-it ultimatum. In the end I took it since even if they enacted the performance clause I would still received five months’ worth of guaranteed salary which wasn’t that different than the six months I had.

Plus, by this time, I was financially independent and the move got me to Colorado, so I felt I was adequately prepared and compensated.

Well, as you might know, things did not go well. They created nonsensical issues and gave me unattainable objectives to hit within a 40-day grace period (the first part of my severance time). I knew I wouldn’t hit them, didn’t even try since they were unachievable, and 40 days later they exercised part two of my contract and paid me to get lost. This is when I decided it was time to retire and that’s what I did.

My only regret — that I didn’t retire much, much sooner (which I could have done since I had been FI for a decade).

Tips for Making the Most of an Employment Contract

Now that we all have a common understanding of how employment contracts work, here are a few tips for you to consider as you work to negotiate your severance before you’re hired:

In closing let me encourage you that the time to think about getting an employment contract is the same time you’re considering taking a new position. Take the steps upfront to ensure your severance is set before you even set foot at the company.