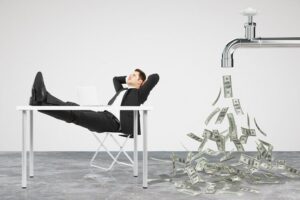 Every once in a while, I hit the jackpot.

I’ve read a TON of money books — far more than I’ve featured on this site — and most are not worth much IMO.

Many are just plain terrible, offering mediocre advice at best. Others suggest basic money tips we all learned in third grade.

Personally, I think so many personal finance books are bad because the authors are just that — authors. They are writers covering a subject. But they haven’t lived the subject (and thus don’t know it) and that comes through in spades.

Other books are “fine”, offering a few good tips here and there. But they are not worth buying because they offer so little.

But sometimes, I run into one that breaks into the upper echelon — a book that makes it into what I consider to be the best money books (ones that almost everyone should read).

This is one of them. I’ll be adding it to my list of 12 Books that Will Make You a Financial Expert. It doesn’t happen very often that one of those books is replaced by another. More on this later.

while searching for retirement books on Amazon. I contacted the author, Rachel Richards, asked for a review copy, and she sent me one.

I read the book in one night and LOVED it! It’s a great review of several vital money ideas — which I think makes it a must-read for those wanting a solid all-around personal finance education.

It’s also one of those books I “hate” because I know if I read and applied it 30 years ago, I’d probably have retired much, much sooner. Dang it!

Over the course of three posts I’ll dig into some major themes from the book. I’ll share what it says and my thoughts on it. From there you can decide for yourself if it’s for you.

Despite the book’s name, it’s oddly not about retirement. At least not much.

Sure “retirement” is in the name. But it’s way more about financial independence/financial freedom (whatever term you prefer) than retirement.

The book’s basic premise is that you can cover your monthly expenses by developing several passive income streams. If you do that, retirement is a possibility but not mandatory. There’s really very little about retirement, planning for it, etc. — the subjects we generally consider when thinking of retirement. It’s mostly about ideas for generating additional income (which is what I like about it).

It’s also not about passive income — or at least not completely about it.

IMO, there are truly very few (if any) income sources that are completely passive. I’ll get into this more as we progress (as will the book), but I prefer looking at the ideas presented as suggestions for creating multiple streams of income. This does not detract from the book in any way. It just recognizes that almost all income streams take effort to create and manage, especially at the beginning.

The book offers a wide range of income-producing ideas in a non-sleazy manner that makes them approachable and worth consideration — not something other books offer. Most “multiple streams of income” and “passive income” books are hype-fests that rival a multi-level marketing event (case in point is Multiple Streams of Income

— which I read shortly after this book. It is almost completely worthless IMO.). Admittedly there’s a bit of over-selling in this book too, but not nearly as much as I’ve seen in other books.

When I initially considered the book’s author I scoffed a bit.

Really? This under-30 lady is going to tell me something I don’t know?

Then she shared her bio. Check out this:

I’m 27 years old, retired, and living off $10,000+ per month in passive income. My husband, Andrew, and I now spend our time traveling the world, visiting friends and family, learning new skills, going on adventures, and doing whatever we want.

Ok, that’s kind of impressive. Now I feel like I was a complete slacker in my 20’s. Hahaha!

She then shares how they got to $10k per month as follows:

The next two years were a whirlwind.

We started a print-on-demand T-shirt business that generated passive royalties.

I published my first book, Money Honey: A Simple 7-Step Guide For Getting Your Financial $hit Together

We bought several additional rental properties that year and the next, and by the end of 2018, we were over the $10,000 per month mark.

These are just a couple examples of a plethora of passive income streams, and we focused all of our efforts on growing them as much as possible. During those two years, we worked harder than we ever have in our lives.

By now the book was getting very interesting to me.

This person had done something I wish I had early in my life as well as something I think many ESI Money readers (and their friends and family) would like to read about.

That said, Rachel’s monthly income report (which you get by subscribing to her newsletter) shows only two main sources of passive income — real estate and book royalties. So +1 to her for generating that much income, but -1 for only doing it from a couple sources (when she’s positioning herself as an expert in passive income.)

Richards then addresses an issue I hear often when I suggest creating extra sources of income — that someone could never make this or that amount (usually a very high number) or cover their monthly spending and since they can’t do that, it’s not worth their effort.

Even if you’re not trying to retire early, maybe an extra $1,000, $2,000, or $5,000 per month would make a difference to you. Whether it pays your bills, is spent on hobbies or travel that you never thought you could afford, or is stashed away for a rainy day, you’re inspired by the prospect of earning more each month.

Passive income isn’t all about quitting your job. The biggest benefits are: Freedom, flexibility, and financial independence.

I am positive that every single American has something to gain—not just financially, but emotionally and mentally—from supplemental self-sustaining income.

This is a HUGE (and true) set of statements — particularly this part:

If you need to see how much of a difference extra income would make for you, check out my ESI Money financial independence calculator and plug in your current numbers.

For example, let’s assume the following…

Now add in just $5k extra in side hustle income and keep everything else the same.

Now sprinkle in a few other ESI principles (4% annual increases, 30% savings rate, $10k in side hustle income) and you can save a decade pretty easily.

The Wrong Way to Fund Retirement

In my free email course, Creating a Great Retirement, I talk about the three ways to fund retirement:

Richards starts the book by addressing what she calls the “Nest Egg Theory”, which is the same as my “Asset Withdrawal Method”.

Traditionally, people have subscribed to what I call the “Nest Egg Theory.” A nest egg is a sum of money saved for the future. Fun fact: the term originates from the practice of putting a fake egg into a hen’s nest to encourage her to lay.

The Nest Egg Theory formally goes like this: save a bajillion dollars by the time you retire and live off that for the rest of your life.

She then spends several pages talking about how this idea is outdated, broken, and nearly impossible these days.

Eventually she gets to this series of statements:

How much money would you say, a millennial needs for such a scenario?

She says it as if $2 million is an unreasonable number that no one could ever aspire to, which is not true IMO.

That said, she does a decent job of backing up her argument by noting how frequently someone actually reaches $2 million.

In reality, how often are people successful at saving that amount?

Baby boomers might not need $2 million, but they certainly need more than what they actually have saved. A 2016 study showed that the mean retirement account savings of people in the 56-61 age bracket was only $163,577.

A 2015 study found that fifty-something workers have a total household savings of $117,000 and most plan to work past age 65 or not retire at all.

In fact, according to the Government Accountability Office, around 29% of households age 55 and older have neither retirement savings nor a pension.

She then summarizes with the following:

Let’s re-cap the problems of the Nest Egg Theory:

Several thoughts from me on this:

In the end, I don’t discount that accumulating $2 million requires a lot of effort.

But it’s not an impossible task either.

This is why I like both saving and earning as much extra as you can — which is where this book is best.

BTW, while I recommend the hybrid option for most people (because I think it’s the most viable choice for the greatest number of people), I actually use and prefer the income-based method of funding retirement. As long as your income sources are solid and you have margins of safety built in, why wouldn’t everyone prefer a never-ending flow of retirement income to a set of assets that could be depleted if you withdraw too much?

In the end this part of the book isn’t really needed IMO. A different (and maybe better) argument could have been made that was something along the lines of “the more income you have the more you can enjoy life and retire early and this book shows you how to create that income.” That would have kept the rest of the book the same without having to argue against saving for retirement.

Anyway, that’s the introduction to this book.

If you’d like to read more on this book, check out Five Categories of Passive Income and How to Evaluate Them.