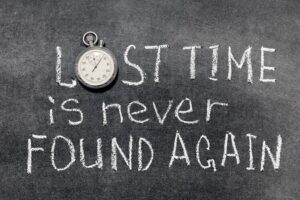 Here’s another one of those “mistakes I made” posts that I like to do every once in a while. It has the added benefit of being a New Years resolution sort of post, which I simply love. 🙂

Doing “mistakes posts” helps me (and ESI Money readers) remember that I’m not always the perfect money manager that this site often seems to make me out to be.

In addition, it shows others that they don’t have to be perfect in how they manage their money to hit their financial goals.

And I’ve been far, far from perfect. In fact, here are other posts that demonstrate my lack of perfection:

Thankfully, I’m not the only one who makes mistakes. Here are some other mistake-focused posts I’ve run:

Yep, there are plenty of mistakes to go around. But one of my worst was detailed on a post I did for Get Rich Slowly.

The time I lost detailed below is part of what kept me from retiring a decade earlier when I was actually financially independent — or perhaps retiring even sooner than that. Ugh.

For your reading pleasure, here’s my mistake/resolution guest post from GRS which I wrote over three years ago…

One of the key concepts JD discusses here is having a personal mission statement which in turn helps you develop a life plan. This plan enables you to develop action steps to be sure you achieve your goals.

I love this sort of thing. I’ve always been a New Year’s resolution sort of guy. Every year I make a list of what I want to accomplish the next year with an eye on five to ten years down the road for the big projects. I write down goals and then break them down into daily habits that set me on the right path.

But for many years I somehow neglected to go all the way in setting specific, long-term financial goals. And I missed five extra years of early retirement as a result.

This is the story of how you can get lost without a map.

A Bit of History

I have been an avid earner, saver, and investor for some time.

I’m not sure when it all kicked in but about 15 years ago I started putting this money stuff together. I had done well up to that point and had a decent net worth, but for some reason things started to click and I began to focus on growing my wealth.

By almost all measures I was doing well. My income hit new heights, my savings rate was high, and my investments were performing well. However, this success was a double-edged sword. Because I was doing well, I could afford to be sloppy. Even without a written plan, I was knocking the ball out of the park financially. So why take that extra step?

So I was on cruise control financially. My good progress allowed me to get away with a back-of-the-envelope plan. It was a simple SWAG based on what I knew about our finances.

This was the problem. My goal wasn’t SMART. Specifically, it wasn’t measurable or timed.

Instead my financial independence plan was simply this:

I knew “roughly” that if I hit these goals I would be financially independent. I knew this instinctively because I had a pretty good grip on our finances (20 years of Quicken data will do that for you). I knew what we made and what we spent. And I was sure that if we hit those numbers we would have more than enough.

So life kept moving along, we kept saving, and all was well. That is until…

As could be expected, life threw us a couple curve balls, like it is known to do.

First of all, I was fired from my job the year after we had a record year. I considered retirement at that point but for some reason I still didn’t run the numbers. I simply stuck with my $4 million/$100k goal. Since I wasn’t there, I kept moving forward and got a new job.

Then that job started to weigh me down. I had a micro-manager boss who was next to impossible to please.

My work life got so bad that it jolted me into reality. I FINALLY ran the numbers and discovered that I didn’t need $4 million in assets or a $100k income to retire. My assets generated around $85k per year and with a few tweaks I could get that to $95k. Creating my retirement budget I saw that I “only” needed $95k to retire each year, and since I had that, I could retire anytime I wanted. Running the numbers and having a specific plan that was measurable made me see that.

So, I retired. And I’ve been loving it ever since.

Admittedly my lack of a formal plan was not a complete disaster. After all, I did retire at 52 with the ability to live off the income my assets generated. It’s hard to moan too much about that.

But most people do not have the finances we have. There’s not nearly the margin for error we had. That’s why I’m writing this post — to encourage everyone reading this to develop complete, SMART financial goals.

That said, we were impacted. Here’s what I lost by not having a SMART plan:

These three mistakes, caused by only having a vague goal, kept me from retiring much earlier than I did.

There were several times I could have retired earlier if I had a specific plan. Namely:

In short, not having a plan meant I didn’t know exactly what I was aiming for. I was lost because I had no map (or at best an incomplete one). It cost me at least a few years.

Again, it’s hard to boo-hoo about my results. But consider the implications for the average family. Without a plan they could lose those five years too — and likely even more. For them it could mean the difference between retiring at 65 versus 70 or 75. Those are some critical years to lose that late in life.

So consider this post a public service announcement: Don’t be like me. Be SMART. Have a financial plan, work it, and achieve your goals.

Here’s wishing you a great and prosperous New Year.