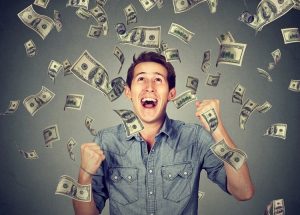 When I was at FinCon (the financial media conference) last September I attended a speech by Chris Hogan, one of the professionals in Dave Ramsey’s speakers’ group.

I don’t know Chris, but have heard him on podcasts, liked what he had to say, and was excited to see him talk. It was a good presentation and I enjoyed it — one of my favorites from the week.

After his presentation he made an offer to get his new book, Everyday Millionaires

(not out then, but now out), at a discounted rate. People lined up like crazy.

It was interesting for me to see this as most publishers will give bloggers free books because they know that 1) the cost of a book is around $1 and 2) they can more than get their money’s worth from almost any blogger with a simple review post.

But whatever, if people wanted to pay for the book, who was I to stop them?

Before I arrived at FinCon I had received an invitation to attend a conference reception with Chris after his speech. So as others lined up to buy their books, I walked through the hotel and to the event.

It was in a bar area just outside the hotel (still on the property) and was packed with 75 people or so. It was loud and guests were drinking and eating appetizers.

About 30 minutes into the event Chris took the floor, thanked us for coming, introduced his team (5 to 10 people), and told us about the new book. It was short and sweet and pretty much what you’d expect.

After Chris finished, several members of his team fanned out to work the room.

The Millionaire Next Door

One of the team members came up to the group I was in and introduced himself.

He was around 30 or so, nicely dressed, and professional in appearance. He reminded me of me a couple decades ago.

As we were chatting he gave the group some details on Chris’s new book.

They had done an extensive research project interviewing 10,000 millionaires (the biggest study of millionaires ever completed) and the book was about their findings.

but for their new book they had surveyed far more millionaires.

The way he “explained” this to us made it seem as if he thought we’d never heard of it.

I wanted to tell him that probably everyone in that room could cite chapter and verse from The Millionaire Next Door, but he was on a roll so I let it slide.

As you know, I’m a big fan of reading about millionaires. I interview them, I love The Millionaire Next Door

(it made it into my top five money books), and I like the update to it, The Next Millionaire Next Door

(here’s my review). So I was very interested to read Chris’s work and see what he had to say.

I asked the young executive if they were giving out review copies of the book (these are copies given to media in advance so they can read the book and then post thoughts/reviews on it near the release date).

He said he didn’t know, but they did have gift bags for us. I could tell that when he said he “didn’t know” that what he meant was “no”.

Sure enough, when the gift bags were handed out they had two older books, but not a copy of the new one. The marketing guy in me died a bit. They had a room of 75 bloggers that probably reached MILLIONS of people. For $75 they could have gotten the word out about their book to that large audience. But they blew it.

Not one to be slowed down though, I emailed my contact on Chris’s team once I got home. I asked for a review copy and they sent me one. I took it on my October trip to DC and read it on the plane.

I’m only posting on it now since the book has finally been released to the public.

As you might imagine, this book is right up my alley. I highlighted much of it and on the flight back wrote an outline of what I wanted to cover on ESI Money.

Over the next week or so, I’ll be posting about the book. I’ll cover enough to hit the highlights but not so much as to ruin it for any of those who would like to read it.

If you want just the very top line, here are my thoughts:

Overall, this wouldn’t crack my list of must-read money books but it would certainly be in the group right after these.

One unique thing about the book (in a way, I think we all “knew” these but the book “confirms” them) is their list of “the most common myths that are perpetuated in our society about the wealthy”.

It’s an interesting take on how the general public perceives the wealthy (which they use interchangeably with millionaires). I’m not sure if this is part of their survey (I’m guessing not) or just their thoughts based on dealing with the public’s perceptions about money.

Either way, I do think the list is correct. I have seen it time and time again when I get stories in the mainstream media — whether it’s about me or other wealthy individuals — people come out of the woodwork with one excuse or another why someone else is wealthy and they are not.

Let’s look at the myths one at a time, the beliefs that the book says leads to the myths, and my take on each one.

The first myth that “the wealthy didn’t earn and don’t deserve their money” is supported by two general beliefs:

The book counters these beliefs with the following findings:

In the end the book concludes that millionaires do earn most of their money and work hard to get it. As such, they certainly deserve it.

Now let’s move on to the myth that “the wealthy take big risks with their money”.

The book says this myth is supported by these beliefs:

In the end, millionaires are neither risky investors nor looking to get rich quick. They save and invest their money conservatively over time and get rich slowly.

Finally we have the myth that “the wealthy have a leg up in education and careers”.

Supporting beliefs according to the book:

So yes, millionaires go to college. But they don’t attend ultra-exclusive schools that set them up for life (like those schools guarantee success anyway). They don’t have outrageous incomes and many of them start at the lower end of the income scale and work themselves up.

As a wrap up to the set of myths the book puts a big emphasis on not letting excuses stop people from becoming wealthy.

Their reasoning is as follows: Now that we’ve shown the folly of these myths, it’s up to each individual to stop believing them, realize they can become wealthy, and begin to take action.

They conclude this line of thinking by noting “millionaires don’t make excuses or believe their success depends on anyone else.”

As you might imagine, I love this sort of sentiment. 🙂

That’s it for this time. To read more, check out the five attributes most common to millionaires.