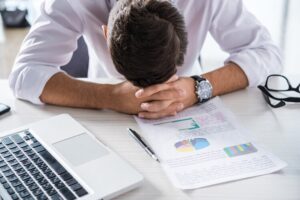 I worked for 28 years before I retired.

During that time I was quite successful.

I became a VP just after I turned 30.

I delivered great business results and thus my career advanced quickly. This allowed me to grow my income by over 8% annually.

Eventually I became the president of a $100 million company with 800 employees.

But that doesn’t mean the road was all rainbows and butterflies. No, I had my fair share of career stumbles along the way.

I thought I’d share five of those today (there are many more of varying degrees) in order to do the following:

Just to note, I’ll be sharing these as they occurred chronologically. I think it makes for a more cohesive story.

It didn’t take long. The mistakes began with my first job out of graduate school.

As such I was ripe when the wheels fell off. The destruction happened as follows:

I saw the writing on the wall and started looking for new opportunities. I found one fairly quickly and was off within two years of starting.

Here are some of the things I learned from this experience:

Anyway I moved on and had an extended run of success at my new company.

At least it started off well.

I was promoted, moved to a new division with more responsibility, given a much larger business (the largest we had), and won a national award for my performance one year.

I had four solid years of pretty much success after success. This was despite working for a maniac along the way.

Then a series of events led to another bad situation:

In the end, it all worked out well for me. But it was painful to go through.

This situation was more of an instance of circumstances over-taking me (versus me making major mistakes) though there were things I could have done better.

It’s Lonely at the Top

Thankfully I escaped the nastiness of my last company and moved into a job I loved with a company I loved…and I thrived at it.

I had two very successful years at the new company, growing in income, experience, and accomplishments. Eventually I was promoted to head a new division that was merging with a company we were acquiring.

This meant my department had 25 people from the existing company and 15 from the new company. And yet we only needed 30 of those people.

Guess who’s job it was to decide on the new structure and get rid of the 10 extra people? You guessed it…me.

This was also the only time I had to ask for a raise for myself. I was taking on a ton more responsibility and yet my boss wanted to pay me the same amount. I went to him, presented my case, and got an appropriate raise.

I spent the first several months under tremendous stress. Making decisions on people’s livelihoods is a terrible thing and I slept maybe 4-5 hours a night — my mind just couldn’t shut off. The upside was traffic was light when I drove to work at 4 a.m. Ha!

Eventually we made the tough decisions, things settled down, and we got on with business.

Unfortunately this is when the cockiness returned. I won’t go into it since it’s frankly too embarrassing, but I reverted to my old self just out of grad school. I acted self-importantly and felt some work was beneath me — just the opposite of what needed to happen. Instead I should have dived in and taught/led those below me.

The fame and prestige had gone to my head and it was a disaster. What’s so surprising is that this came on the heels of me executing such a successful transition between our two companies.

In My Jobs, The Dream Job Turns into a Nightmare I summarized it this way:

As I was shooting myself in the foot, a key executive at my level was shooting me in the back. He was a long-time friend of the president and I found out later that he’d been undermining my efforts since day one (telling the president I was doing this or that that wasn’t acceptable.) In many cases, what he said was true. But he often twisted the facts to serve his purpose — which was getting rid of me and putting his man into my position.

One day my boss invited me to lunch and told me he was returning me to the former position (still a VP) I had before this one. I was devastated and humbled. A colleague of mine was to take my spot (which he did well in for about a year before he too crashed and burned.)

The one shining spot was that I kept the higher salary I negotiated.

Fortunately I learned my lesson this time, though it was a bitter pill to swallow.

When told I would return to my previous position, I decided two things:

It’s ironic but I enjoyed some of my greatest career success during the two years it took me to find a better job (yes, TWO YEARS! I wasn’t going to settle for any old job just to get out of there.) Our company won several awards at our industry convention, many of which I was directly responsible for. I was even given the highest award for the person who had the single-most positive impact on the entire industry. I was stunned when they called my name as the winner and I was very grateful, as you might imagine.

Here are some of the things I learned during this time:

Fortunately I found a new position I was excited about at another company, though the outcome wasn’t what I had hoped for…

The Blame’s on Me

The right opportunity turned out to be for a web start-up. It was the dot-com boom and I was going to be rich!

Unfortunately we spent our $40 million (yes, FORTY MILLION DOLLARS) getting a website up and running that no one wanted to buy from. I personally had great success (our traffic numbers, for which I was responsible, were way above projections) but since we made very little revenue, the company suffered.

When it came time for our second round of financing, it was the dot-com bust and no one would invest in us.

The company went under, but fortunately I was able to get a position with our parent company.

I had a few years of success when I experienced a case of deja vu — our president was fired and a new guy was brought in to “fix” things.

As happens many times, the new guy was full of himself and knew he could hit a home run. So he promised the board an unreasonable profit number — one that we could only make if all the stars aligned.

A key part of this was the marketing plan which I was to develop to hit these huge numbers (with less money than I had in the past, BTW). The only possible way to even come close was to throw a Hail Mary.

In My Jobs, The Blame’s on Me, I summarized the situation and the results as follows:

We had been given a profit number that was far out of our reach. Our only chance was to swing for the fence and try a risky plan, but one that had at least some chance of getting us close.

The president suggested I consult with a marketing firm he’d used in the past and do whatever they suggested. I worked with them, and they came up with a plan that seemed reasonable — at least it had a chance of succeeding.

I presented it to the president as well as his right-hand man (who he’d brought in from his last company) and got it approved. Now, we just needed to execute the plan.

The short story is that we executed it alright, then it executed us — the plan failed disastrously. Our sales tanked big-time and were down during our biggest time of the year. The board wasn’t happy.

The only thing they “remembered” is that I had come up with a bad plan that was killing our company. Sure, I had advocated the plan as our only hope, but they had been in agreement and certainly given their approval. Otherwise, how could the plan have gone forward?

From there it was all downhill. As the scapegoat for the performance, my boss was set to demote me. I had an employment contract so there was no way he could fire me (without paying me a year’s salary) and he couldn’t pay me less. And even if he wanted to demote me, he might not have been able to (the contract was fuzzy on that issue), but I wasn’t going to stay around and find out.

I wanted out, he wanted me out, and I had an option — a job that eventually turned into the best job of my life. More on that in a minute.

Here’s what I learned in this position:

So I went into the best job of my life and spent nine wonderful years there. If you want to read what made it so amazing, check out My Jobs, Last Three Jobs Before Retirement.

I would have probably retired from that job (after all, I was financially independent at that time) until a series of events opened up the president position at a company in my old industry (actually a competitor of the company I had left last). It was part calling and part “I want to see what it’s like being a president” that made me accept the new position and leave my beloved company.

The short story of what happened is this:

I detailed the drama and background in The Day My Most Valuable Asset Took a Hit if you want specifics.

Here are my key takeaways from this position:

So there you have it…five situations where I messed up and was forced to learn something.

I hope my failures help you make better decisions in your career.

Now it’s your turn. Anyone out there ever had a career setback? What did you learn from it?