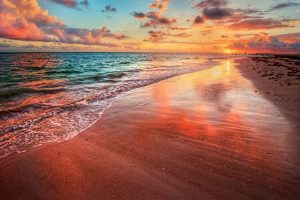 It’s been two and a half years since I retired! Where has the time gone?

I’ll tell you where it’s gone — into fun, relaxation, and enjoyment! LOL!!!

For those of you who are sticklers, yes, it’s actually been two years, six months, and five days. But who’s counting? 😉

Since my retirement day I’ve given an update every six months just to let everyone know how it’s going.

Today we’ll do the 2.5-year anniversary version with details of what’s happened since my last update in August and the mini-update over Thanksgiving.

To make this summary easier to read, I’ve put my thoughts into categories.

I keep playing with how to tell someone I’m “retired.” The main problem is that I look much younger than I am, so saying “I’m retired” makes people’s heads spin and then leads into details, a longer chat than I want, and so forth.

So I mostly go with “I’m retired.”

This leads to “How could that be?” (like it’s some sort of impossibility). I do have a decent answer for this. I usually say, “I earned a good amount, saved a ton of it, and invested wisely.” (Wow, someone should start a website based on that!) 😉

They generally nod at this point and the conversation then spins into, “What do you do with your time?” My mood at the moment mostly determines how I answer this but my favorite response is from a friend’s friend who is retired, “Whatever I want.” Ha!

BTW, I often get the reply, “Were you military?” when saying I’m retired since we have an Army base and the Air Force Academy in town. Plus I have short hair, so I look like I fit the mold.

The biggest money news in the past six months has been the huge stock market drop in December (and the on-going drop before that). I have a few thoughts on this.

First of all, we took it on the chin financially. From the peak in August to the lowest day last year, our net worth was down $500k. Yep, half a mil.

Second, this did not phase me a bit. Why? A couple main reasons:

Third, you should have seen the chatter amongst FIRE bloggers during the drop. You would have thought the world was coming to an end! I suppose if you planned poorly and had your budget stretched to the max, then the world was coming to an end. But that’s the case whether you have a job or not. If everything has to go right for you to be “ok” financially, your house is built on sand.

I think many bloggers whined about the drop because IN THEORY they had all their ducks in a row, knew they would not panic, had it all covered, etc. but when the drop actually happened they crumbled like a house of cards. This, my friends, is the difference between theory and reality, between education and experience. If you plan for reality and base it on experience (or at least a solid theory you’re willing to stand behind), you shouldn’t have catastrophic problems.

The situation made me think of a couple quotes. First, here’s a classic from Mike Tyson:

Everyone has a plan until they get punched in the mouth.

Tyrion Lannister: l’m the captain of the ship, and if the ship goes down, l go with her.

Lord Varys: That is good to hear. Though l’m sure many captains say the same while their ship is afloat.

In other words, it’s easy to say one thing when all is well, but what do you say (and do) in times of trouble? Often that is quite different.

One of those who was the most “panicked” (I put that in quotes because you never know if he’s serious or joking as the combination of writing and his style makes it hard to tell true meaning — I think he does that on purpose, BTW) is Sam from Financial Samurai (which is to this day one of my favorite sites). I’m sure that he isn’t panicked personally because he’s loaded (he makes me look like a pauper), but he was sure stirring the pot (another one of his specialties — on purpose again) during the drop. Here’s one of our conversations during this time: 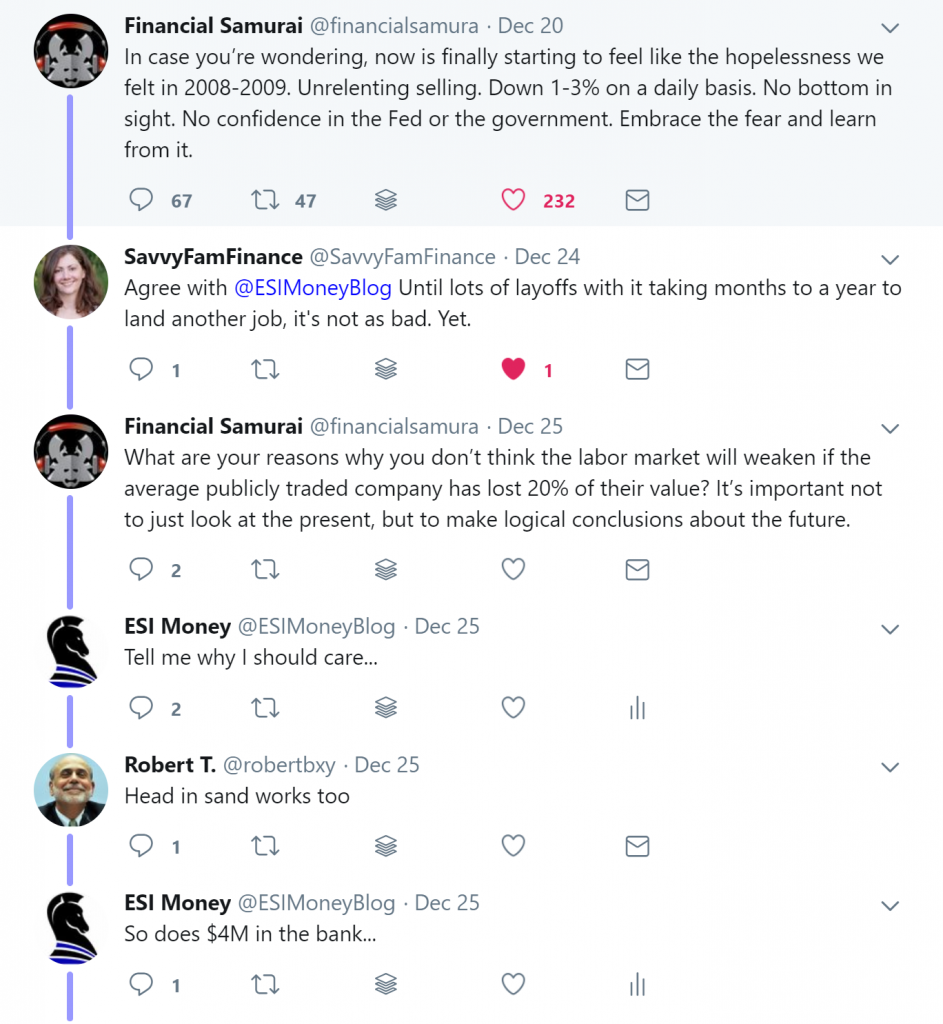 My points in this all (which are hard to get to on Twitter) were:

IF (and this is a big if) it ever was like 2008 or ever gets like that, I’m actually ready to pounce. I have a ton of cash saved and would buy properties like crazy if they dropped off the face of the earth. So bring 2008 on and I’m ready to buy.

Again, if your finances are built on a house of sand, then you might have been worried. But if you do it right, you build them on solid rock — which would require a massive hit to make a dent. This is what I do, it’s what I recommend, and thus I sleep well at night.

All this to say watch out for those who play at finances, hold themselves out as experts, and then panic at the sight of some trouble.

Ok, that’s enough ranting. This is supposed to be an update!