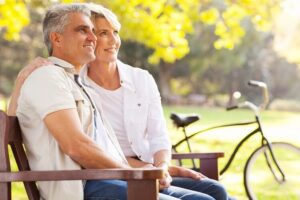 and I loved it!

It’s written by Chris Hogan, a Dave Ramsey Personality (yes, Dave Ramsey has “Personalities” who speak with the backing of his organization — here’s the list of them if you’re interested.)

Instead of doing a more traditional book review (which I generally hate), I thought I’d list ten things about the book that I loved (there are many more great things about it than that but if I detailed 32 things I loved this post would get pretty long! LOL!)

In addition to the list and Hogan’s thoughts on each topic, I’ll add my two cents as well.

I’m breaking it all into two parts since one would be pretty long.

With that said, here are ten things I loved about Retire Inspired in no particular order…

It Starts with Redefining Retirement

Any book about retirement these days needs to address the fact that the traditional definition of the word is changing. Otherwise, it appears out of touch IMO.

The author addresses this topic several times throughout the book including this quote early on:

In order to get down to the business of dreaming, we have to begin to think about retirement in a different way. I want you to replace those old, tired, and depressing ideas attached to the word retirement with the truth.

Retirement is a new chapter — some of your best years. It brings new opportunities. It’s about your legacy. Retirement should mean wealth, peace, fun, satisfaction, security, and freedom!

Then later he says:

And even later, he refers to the book’s subtitle, “It’s Not an Age, It’s a Financial Number”, with the following:

Retirement is not an age; it’s a number — a financial number. It’s the amount you’ll need to fund your dreams in retirement.

There’s so much that I love about this line of thinking. A few thoughts from me:

Back when I was still working but thinking about retiring I had a friend who told me about a buddy of his. The guy had retired at 50 and whenever anyone asked him (seemingly in disbelief that he could fill his time without working), “What do you do every day?”, the guy would always answer, “Whatever I want to do.”

This story was one of the things that pushed me over the edge and made me retire — I wanted to be able to do whatever I wanted to do. I like the fact that Hogan mentions this concept several times in the book.

Retirement is Your Responsibility and Excuses Won’t Cut It

I love Hogan’s tough love with those who either 1) expect retirement will somehow fall into their laps with no action on their parts or 2) have one excuse after another as to why they can’t work towards the retirement they want.

The author accepts none of this and regularly talks about the responsibility of retirement being yours and how making excuses is a waste of time and effort.

Let’s review a few of the book’s quotes related to these ideas starting with this:

You are responsible for your own retirement.

This short sentence is found early in the book (page 5), italicized, indented, and on a line by itself just to make sure it stands out as it should.

Hogan follows it up later with this:

Where does your retirement begin? That should be no mystery at this point; it all begins with one person — you! Why? Because we are talking about your budget, your plans, your goals, your effort, your sacrifices, your commitment, and, yes, even your boundaries. You, my friend, are the catalyst.

On the subject of excuses, Hogan says:

Excuses are easy to pick up and use because you can find them lying around almost everywhere in our culture. The truth is that you will have to retire someday, and when that day comes, you won’t care about all the reasons why you thought you couldn’t prepare for that day.

There are no excuses. When you come to the end of your work life unprepared, there will be no one else to blame but yourself. So don’t give yourself an out. Making excuses is destructive behavior, so make sure the buck stops with you.

Several thoughts on this:

In the end, retirement, just like personal finances in general, is up to you. Whatever you make of it will be what you get. I hope you put together a plan now, implement it, and have a very long and successful retirement.

If you don’t, it’s likely you won’t have the retirement of your dreams. As the old saying goes, “If you fail to plan, you plan to fail.”

I haven’t tried any of these because I don’t really need them, but if anyone does, please let me know what you think.

As for freebies, I have a few myself:

Obviously no one tool or resource will answer every question you have. But if you use several then consider what they say, collectively they can help you develop a solid plan.

I’ve mentioned several times that everyone makes money mistakes. I have made a ton of them (here are the ones I made on the way to FIRE as well as a list of my worst mistakes) as have millionaires and we’ve all still been able to amass wealth.

While I’ve always said that we’ve all made mistakes, I also note that it’s common for wealthy people not to have made HUGE mistakes (or at least haven’t made them for long) they couldn’t recover from.

Hogan adds to this saying that it’s better to make money mistakes early in life, learn from them, and adjust.

This is the decade (your forties) when you start to run out of time to fix your mistakes. This is when small mistakes are no longer small. Hear me when I tell you, though, that that doesn’t mean your mistakes are insurmountable. I’m just saying they are a little more formidable to overcome than they were when you were twenty or thirty years old.

This is good thinking IMO. You can alter the idea here a bit and see that many wealthy people probably make their mistakes early in life. This way they can learn from them and move on. They have time to make up for and overcome their problems. But a mistake at 40, 50, or 60 becomes that much worse since the recovery time is shortened.

I know I made most of my money mistakes early in life. They cost me dearly as I lost a TON of time for compounding. That said, it was better that I made them at 35 than at 50 or else I could still be working.

Time is Your Biggest Investing Asset

Overall, the book’s investing advice is pretty basic and not that great IMO (his main suggestion is to get an advisor who can help you invest, ugh).

But one thing he gets right is the value of time in investing.

He discusses compound interest and thus the need to begin investing as much as you can as early as you can. For example:

Interest is kind of like an employee who is always on the clock, out there doing the work to get you closer to retirement.

Investing over the long haul is hard. You have to be strong enough to weather the financial storms that pop up. It may take a while to see any real gains. There is no such thing as getting rich quick. There is no magic formula for building wealth overnight.

You know what the secret ingredient is for wealth building? Patience. Fear, anxiety, and impulsiveness are the enemies of patience, and they’ll all lead you into retirement broke. Don’t let them! Keep your eyes on the goal and keep moving toward your dream — slow and steady.

I love, love, love this! Start early, save and much as you can for as long as you can, and let time do the rest of the work.

Hogan and I agree — time is your most valuable investing asset.

Another thing we agree on is forecasting a reasonable rate of return for any future planning. Hogan talks about using 8%, which is also what I use. I wonder how his 8% went over with 12% Dave Ramsey. Ha!

That’s it for this round. If you want to see the other five things that I liked about the book, see part 2 of this series.